I’ve been thinking about what happens in many secondary schools on the first day back in September. All the staff are sat, dreaming of the lay-ins that they’ve had for the past few weeks and up pops a PowerPoint slide that  gets staff attention; the subject results slide. Up until recently it has been %A*-C but more recently it might be levels of progress. There are mumbles and sometimes grumbles such as “They only had 1 student in Chinese, no wonder they got 100%” or “It was a difficult year group” or “Sammy Thompson never attended my lessons so the % isn’t fair”. The data isn’t representative of individual staff or possibly even departments and this public showing has the potential to cause bad feelings. The whole school stats may be ‘good’ but there will always be the subject that did ‘best’ and the subject that did ‘worst’.

In the worst cases, in schools where everyone has the same performance management target based on % or LOPs, we can all sit and work out who will be ‘passing’ or ‘failing’ their PM this year.

So it made me think, why are teachers shown this slide? Why do teachers need to know other subject’s overall results? And if they do need to know does it need to be shown in this way?

Does showing staff this ‘Big data’ necessary? Does it tell any kind of story? Or is it the ‘little data’, the indiuvduals, the groups of students, a more important place to start to tell a story?

This idea of ‘big data’ vs ‘ little data’ can be extended to how schools use data in general including that from sources such as Ofsted.

In the recent Ofsted framework there are a long list of significant groups or groups of learners. 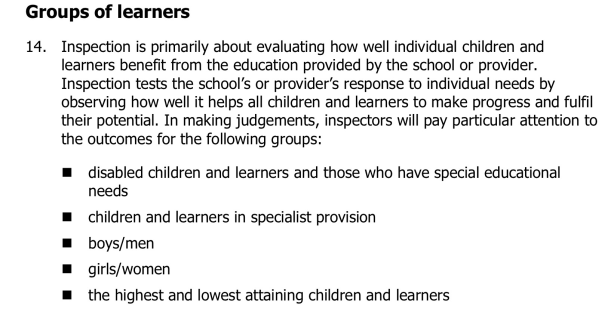 I would class the data that is generated by looking at these groups as ‘big data’; it may tell a bigger story about the school, a year group and even a subject but probably as little use to a classroom teacher. ‘Big data’ is for leaders, Governors, Ofsetd and external agencies, not for teachers to be concerned about. I really don’t need to know that 43% of my class is PP and 26% is Sen. This data has little meaning to a classroom teacher.

A classroom teacher needs to use the ‘little data’; the individual information about single students to inform how they may or may not need to support them.

Some data leaders feel it necessary to share all data with everyone (kind but necessary?) So if you’re in charge of data in school consider these points:

Oh and ask yourself, do you really need to show staff a slide of all subject results next week?

I have worked with leaders who use a metaphor (or is it an analogy?) which uses a bus to compare with a school organisation.

The two most commonly used aspects of the metaphor are ‘getting everyone on the bus’ (ensuring your colleagues have the same values, vision etc ) and ‘making sure people are on the right seats’ (ensuring individuals are doing the job that is best for them and the organisation).

I’ve always disliked the way it was used because I always heard it being used as a threat or a comment made when something or mainly someone didn’t ‘fit’.

Whilst the person using it may think it is a clever thing to use to describe their organisation, I left seeing the negatives of how it made people feel and how misguided it really is. Here’s why. 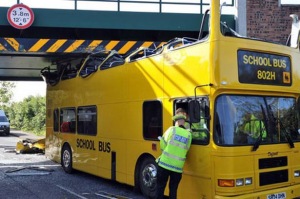 Since then I found out that this metaphor was suggested by Jim Collins and clearly school leaders have latched on to it to supposedly motivate their staff.

Here he says there are three ‘truth’s a great leader needs to accept to make a great organisation. Whilst these have some truth in them, they are not enough in themselves. They also have potential negatives that will outweigh the positives.

Whilst he probably never envisaged the metaphor to be used in the way it may have done the biggest issue I have with it is the role of one driver with others passively following in the seat they’ve been told is ‘right’ for them.

Schools aren’t as simple as this. Leadership is much more complex. Most importantly the power,destination and direction should not belong to just one person.

Perhaps more poignantly, poor leaders pick up on a metaphor (or sound bite) used by someone else and throw it into staff meetings without thinking about what it really means and the negative impact it may have on colleagues.

It’s a poor metaphor. Please don’t use it.

(Whilst researching I just found that Kev Bartle has already posted on this exact metaphor with much more sophistication and detail: