I saw something on Twitter about how people speak about children and it has reminded me of a post I wanted to write.

Over my years of teaching I have met people who have varying levels of professionalism. In this I mean how they behave in school (in front of students, with other staff or in offices/staffroom), what they say (about other staff, students, parents etc.) and their overall outlook of the school itself. Schools are unique places to work. It is really tough to stay professional at all times especially when unexpected or bizarre events test you out.

The thing that has really saddened me over the years is where ‘young’ and impressionable teachers have worked alongside teachers and leaders whose professional behaviour is variable and in some cases unacceptable. They have then seen this as accepted practice and go on to replicate the behaviours.

In the most extreme cases, new leaders have watched poor senior leadership and have copied them. It is exacerbated where these people have not worked elsewhere and seem to think these behaviours are acceptable practice and how all schools work. They’ve never worked with an inspirational leader. They’ve not worked with someone whose professional behaviour is exemplary.

I will not claim to have had 100% perfect professionalism throughout my career. I am embarrassed and saddened to admit this. I too have succumbed to peer pressure in accepting or not challenging poor practice or improper comments. However as much as possible I try to reflect on how certain people in my career, who I hugely respect due to their professionalism, would behave and what they would say in a situation. I have the luxury to have worked with some inspirational leaders. Some people have not and the sad spiral of unprofessional behaviour has the potential to carry on infinitely unless they realise this. Even sadder is where these people are seemingly rewarded with promotion or extra responsibilities because they have made senior leaders think they are worthy as they have replicated their own poor behaviour.

Where unprofessionalism is practised in groups it often becomes a ‘You’re one of us’ situation. People who may point out that what was said might be inappropriate or even dare to question behaviours become the enemy and cannot be trusted. Peer pressure is a wonderful thing in these situations. You have to be a strong person to disagree. You have to put your neck on the line. Is it easier to conform and be accepted or to speak out and risk isolation? And if it’s serious, whistle blowers rarely survive.

I don’t really know what my conclusion is on this. Solutions? Try our best to be as professional as we can be even if surrounded by some that aren’t? And if there is anyone reading this who has no idea what I’m talking about then you have been really blessed in the schools you’ve worked in. That, or you’re blind to it….

I will be honest. I wasn’t going to do a blog or tweet about this but now I think that sharing some of the messages could benefit others so I’ve decided to share what I took from meeting Mike Cladingbowl yesterday.  Another attendee @cazzypot has also blogged what she took from it here.

Firstly a big thank you to Mike for inviting us all along. It was a really great mix of people from all different contexts. We were able to be very open and Mike was very down to earth. He is very aware of the ‘ins’ and ‘outs’ of schools today. He really has been committed to listening to teachers, even if in some cases we agreed to disagree. He’s a great leader and what a lucky team he will lead from September. I asked him if he’ll miss all this attention and photos as an edu-celeb, I bet he will! 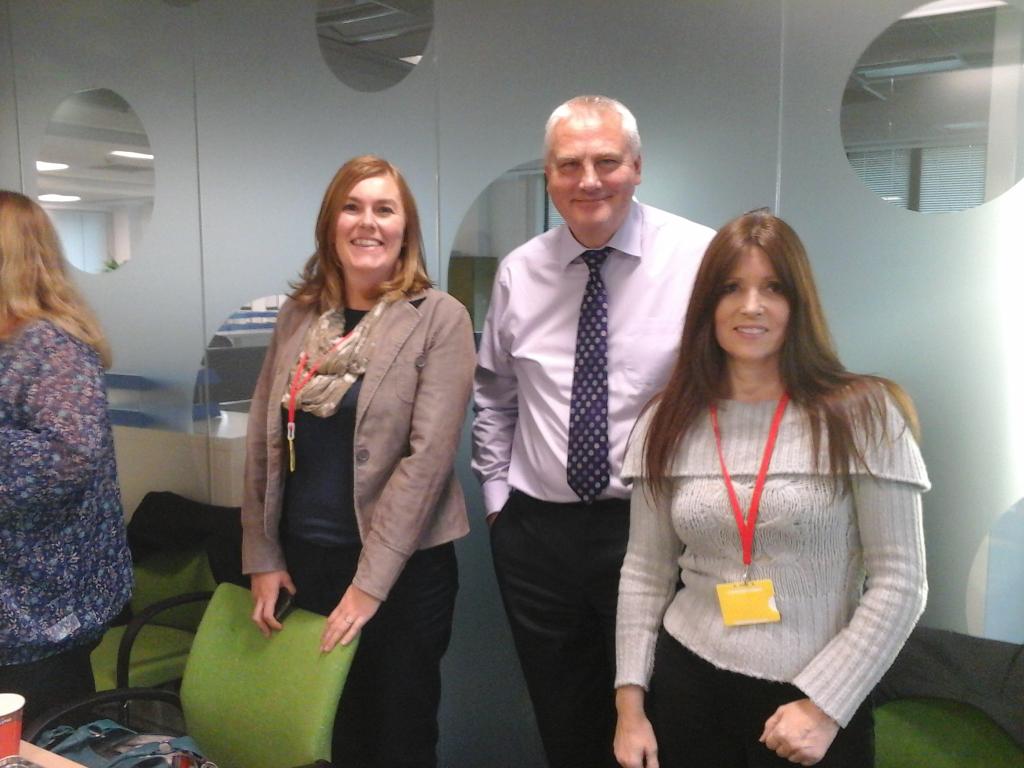 For the sake of clarity I will put in orange what Mike said and the rest are my views/interpretation/comment. Overall these are my select points and are not representative of the entire meeting.

I felt I had to make this point and asked Mike what Ofsted might do to combat this. One of the biggest day to day problems that teachers have is leaders interpreting ‘what Ofsted want’ or listening to a consultant inspector who ‘sells’ their knowledge which is inaccurate. He clearly isn’t impressed with those inspectors that are perpetuating incorrect information. He used the phrase ‘weak leadership’ for those leaders that rely on what they think Ofsted want for making decisions.

I queried HMI coming in to schools and telling leaders how they should do things. As teachers we are told ‘we’re doing it this way because our HMI told us to’. Whilst Mike agreed that this wasn’t always appropriate there may be times when it is especially if a school was in special measures and needed some basics sorting. I suggested they may say to leaders ‘you seem to have issue X, what could be done to resolve it?’ and come to a group agreement on an action as opposed to leaders doing directly as they were told to. We discussed the difference between inspectors giving ideas and telling schools what they should do.

Mike clarified the definition of these values and referred us to the Inspector’s handbook document which outlines what this means:

The social development of pupils is shown by their: acceptance and engagement with the fundamental British values of  democracy, the rule of law, individual liberty and mutual respect and tolerance of those with different faiths and beliefs; the pupils develop and demonstrate skills and attitudes that will allow them to  participate fully in and contribute positively to life in modern Britain.

Inspectors should consider how well leadership and management ensure that the curriculum: actively promotes the fundamental British values of democracy, the rule of law, individual liberty and mutual respect and tolerance of those with different faiths and beliefs

Mike was clear that whilst there may be disagreements with particulars in inspections and reports, that teams are mostly correct in their judgements of a school. Some of you may say that they should be 100%, yes they should but I think it is more noble to say ‘most’ than to say ‘all’ when inspectors are humans that can make mistakes, as we all can.

Mike said for us to think about this,

Is there a child in my school not doing well? Who is it/are they? What are we doing about it?

I particularly liked this because he did not mention FSM or EAL or LAC or SEN. It is ANY child. Our duty is to support all children equally.

He also said very clearly that leaders AND teachers should consider these questions about their practice;

Why are you doing what you’re doing? Why have you decided to do it this way?

and if the answer to any of this is ‘For Ofsted’ then a school needs to rethink what they’re doing.

This includes teacher level. So take for example your marking. Why do you mark that way? There isn’t necessarily a ‘right’ answer but there are definitely some wrong answers. This very much supports the idea of us using research including our own research in school to determine what we do and how we do it. Will responses to these questions differentiate ‘Good’ from ‘Outstanding’?

My personal belief is that inspectors will know an Outstanding school when the dialogues they have with all staff are true discussions about what works and what doesn’t work for that school and about what they are trialling, what they’ve trialled and what impact if any the trials have had. I think this sort of behaviour is that of an Outstanding school that is prepared to take risks. Nothing is done for Ofsted. Good schools just do what they ‘know’ works and nothing new in fear of dropping.

There were lots of grumbles and chuckles when Mike asked how many of have seen lesson observation forms with pages and pages of multiple matrices.

My feeling is that Ofsted hope to move towards working with schools in coming to a judgement instead of just being judged by the inspection team.  Mike said the new proposal for ‘Good’ schools is very much based around a dialogue with HMI every 3 years. Whilst another attendee didn’t agree I urged him to consider ensuring that ALL voices get heard in inspections rather than the select view as usually decided by the school. A staff survey should be compulsory to issue but optional for staff to complete & off course be anonymous.

It’s not all about the data

The belief still exists that inspectors have already made their mind up about a school from the data before they’ve entered the school. Of course Mike confirmed this not to be true even though presented with anecdotes from the group on how they believed this to be true. Indeed last week I saw a report where it clearly said the school’s results were below floor standards but they got a ‘good’.

If you haven’t done it yet, Mike is very keen for all colleagues to complete the current consultation on Ofsted. Please complete and share!

The journey to and from Birmingham was enhanced by meeting up with Fiona (@FKRitson) She is an amazing English teacher. She inspired me with her tales of fabulous lessons on ‘Of Mice and men’.  On the train on the way, we were gassing about teaching and teachers when the girl behind me started to giggle She told us she was a physics NQT who had managed her first half term. Teachers seem to be everywhere!

On the train back we were gassing again about buying our own materials and in particular buying a visualiser. The man next to me politely interrupted and told us he was a local school Governor. He owns his own accountancy business and wanted to ask us about what we were discussing. We made it very clear how many teachers do spend their own money on resources. He was genuinely surprised by this as he said he would never dream of doing this nor any of his employees doing it. He said he was going to speak to his school to see if it happens. Hopefully it gave him an insight to the world of teaching.

A really great day. Thanks Mike and his team at Ofsted & thanks Fiona for being a great travel companion.