I personally believe that we need Ofsted to hold schools to account. 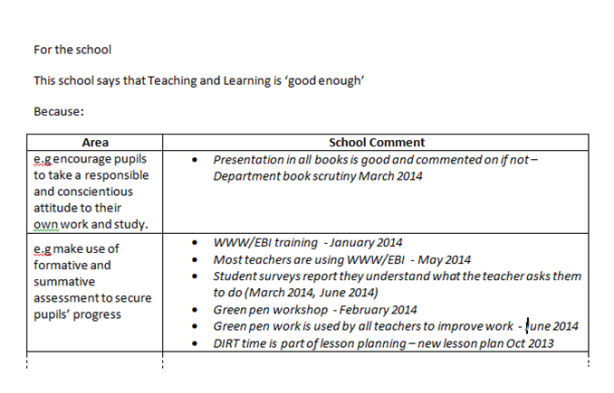 Ultimately, a school should be driven by the people in it. We need to know what we are being held to account with and that process must be as objective as possible. The standards decide the ‘what’, the school decides the ‘how’ and the ‘how effective’  and finally Ofsted holds to account by rubber stamping (or not) the school’s evaluation.

When the results are a result of students having private tuition.

How many schools ask students directly if they are having private tuition in a subject?

Do you use this in results analysis?

Someone told me today that a school with barely any maths teachers got its best ever results one year. Most of the students had private tutors.

Having read Stephen Tierney’s blog post on accountability and other Twitter discussions on how Ofsted needs to change I have been thinking about the whole system of school accountability.

I think that for Ofsted to change and schools have to significantly change how they view accountability. Currently many schools run like this:

Who is most accountable? To whom? Who makes strategic decisions?

They run their schools for Ofsted. Using the criteria that Ofsted publish for inspections as a basis for what they do. When Ofsted make a press release it is repeated in school and if action is needed to change what the school is doing to meet this, then it is done.

They listen to every Government announcement and re-act to it regardless as to what was happening before (A classic case of this was schools entering early for English & Maths and then when it was announced that these figures wouldn’t count in league tables suddenly withdrawing the entries).

The ‘power’ of decision-making comes from the top. The people at the bottom are the ‘receivers’ of the decisions. They aren’t protected. They are just told that Ofsted/The Government have changed so we ‘have’ to do it. The tail is wagging the dog.

Is the tail wagging the dog?

These schools are confusing being accountable to Ofsted and allowing Ofsted to determine how things are done.

Whilst many blame Ofsted for this, essentially it comes down to the leaders in a school to decide what is happening in a school. Ofsted say:

We inspect schools to provide information to parents and carers, to promote improvement and, where applicable, to hold schools to account for the public money they receive.

It doesn’t say, ‘by following  model X’. They don’t care how it’s done (within health and safety guidelines) they just want to check schools are doing what they should be.

So why aren’t schools making their own decisions?

They don’t know how to

Education is an odd system. If you’re a good teacher you get promoted to do things that aren’t directly teaching. Like leading and managing. Being a good teacher does not necessarily mean you are a good leader and manager. You may lack the strategic skills needed on how to pull together all the aspects of your school and come up with a coherent, manageable, effective plan. In this case you will then look to what is being ‘said’ in education and you can just follow that. If it comes from ‘above’ then you can always justify it.

This is high stakes stuff. You’re impacting the quality of education for hundreds and thousands of children. You’ve got to get it right. If it comes from ‘above’ it must be right.

They don’t want to – it takes too much

To come up with a  comprehensive plan  for your school is one thing. To implement it, monitor and evaluate it is huge. Schools are busy places. A dysfunctional leadership will make the task almost  impossible.

They think there’s only one way of doing things

The Ofsted way. There must be a ‘golden’ formula and Ofsted are the ones who are giving it. You spend their time trying to work out what this formula is from speeches,  press releases and Ofsted documents.

The next post will look at what Ofsted and schools can do differently to ensure that accountability and strategic decision-making are separated.

Following on from Ofqual’s implication via their survey that making students learn a mark scheme is ‘undermining qualification standards’ and gives them an ‘unfair advantage’ I’ve thought about how exam boards don’t help the situation. I believe that there are ‘hidden’ hurdles for students in exams. Until Ofqual insist that exam questions are marked fairly in relation to the question that is asked, teachers that care about students results, will look at mark schemes and in turn teach these to students.

I teach with two exam boards. One for GCSE religious studies and one for AS/A2 Critical thinking. In both cases there are hidden success criteria that if unknown will limit student achievement.

For the GCSE one of the questions is always structured as follows:

Do you agree with/think that X?

Give two reasons for your point of view.

Now you would think that if a student gives two reasons that they would get full marks because the question only asks the candidate for this. However this is not true. If you just give two reasons you get half the marks.

Here is the mark scheme:

If a student does not ‘know’ the mark scheme this will mean that they can only achieve 50% of the marks. My question is, why doesn’t the question say ‘Give two developed reasons’?

It does the same in another question where it says ‘Give reasons’ but candidates can only achieve full marks with 3 reasons or a combination or developed/simple reasons. There is a ‘hidden’ hurdle for candidates. Why not make this explicit?

In a similar way the A level I teach does the same, with unknown emphasis on particular elements to achieve the higher marks. Here is an example question:

In your argument you should include relevant principles and explain why you have rejected at least one alternative choice. Support your argument by referring critically to the resource documents.

Now you would expect the mark scheme to credit:

However, the mark scheme reveals that to achieve full marks:

If a student chooses to write about ethical principles then 2 is not enough. Why doesn’t the question say this?

On another paper it asks:

Write your own argument to support your view.You should use your own ideas and you may use ideas/evidence form the resource book to help you.

Whilst all students know how to write arguments at this level the mark scheme puts emphasis on particular argument elements and additional features that they may not ‘naturally’ do without knowing the mark scheme, including:

and in some mark schemes it adds:

Typical indicators of Level 3 are:

Consistent and well-supported use of intermediate conclusions and/or hypothetical reasoning is an indicator of Level 4.

If I don’t read the mark schemes as a teacher and then tell the students this they will not be able to access the higher levels. Whilst some of the points form the basics, if examiners are being given this sort of information as to what achieves higher levels then surely it is right that the students know this? Ofqual imply that getting the students to learn the mark scheme gives them some sort of advantage. They are right of course. If I didn’t tell the students then it would come down to chance if they included the specific things that examiners are looking for.

So the question is, do you prepare students with all the information you can or leave it to chance? I know what I do.

Last week Ofqual announced it will be issuing a survey to schools for teachers to tell them about the strategies they use to prepare students for exam to ‘maximise students’ results’. They said

“There is evidence, some anecdotal, about how some of these strategies might undermine qualification standards. We want to get a better understanding of what happens in schools and what teachers think about approaches to maximising results; some of which are seen as acceptable and others which are recognised by teachers as pushing the boundaries, or even breaking the rules.”

The survey asks some very specific questions about what schools are doing to try to get the best results.  Whilst some of the points are incredibly serious in terms of breaking exam regulations (opening exam papers early), others are more ethically questionable, i.e changing teaching midway through a course due to policy change. Then there are some teachers are actively encouraged to do i.e focus on ‘C’ border students or borderline students being ‘houthoused’.

The implication behind the survey is that all of these practices are unacceptable. I agree some are but others aren’t.

Who can honestly say that their school has never done any of these? 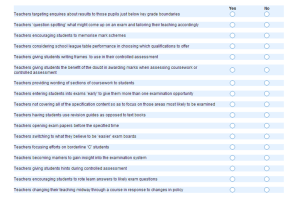